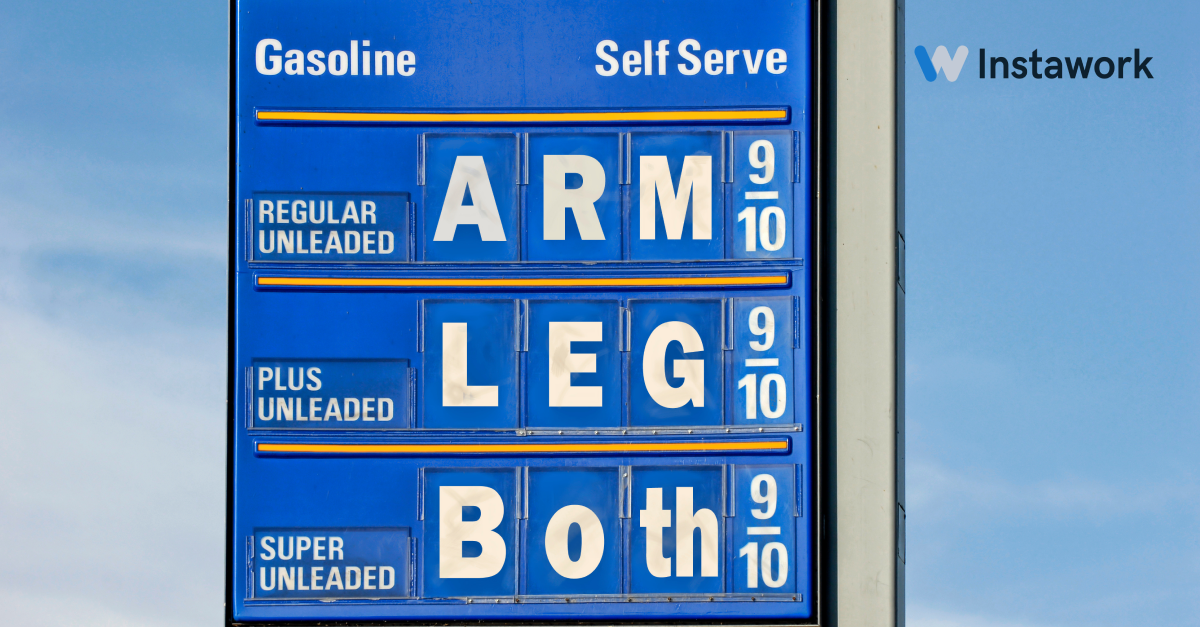 In April we studied the dynamics of commuting for in-person hourly workers in metropolitan areas across the United States. Since then, gas prices have risen by roughly $1 per gallon, and they're up by $2 year-on-year. This increase places a huge burden on people who have to be present at their workplaces. How have they reacted?

The burden of high gas prices

In some of the nation's biggest metro areas, the average one-way commute for workers on our platform can be 15 miles or longer. That's 30 miles per day for the round trip, and about 600 miles per month for people who work a shift every weekday for four weeks. More than 80% of these workers are drivers.

So how much more are they paying for gas? The Environmental Protection Agency’s most recent report on automotive trends suggests that the “real-world” fuel economy of late-model cars is about 25 miles per gallon. To cover 600 miles per month, a driver needs 24 gallons of gasoline. Last June, when gas prices hovered around $3 per gallon, the total cost came to $72. So for workers with a 15-mile commute, the extra cost this month is roughly $48. For workers with longer commutes – like those in Detroit, Houston, and Los Angeles – the extra cost is more like $60. And for workers with vehicles that have lower fuel economy, like pickup trucks and older cars, the added monthly cost could be closer to $100.

That’s a lot of money for people on modest incomes. An in-person hourly worker on $20 an hour might earn $40,000 per year. In the Consumer Expenditure Survey from the Census Bureau, the average annual spending for people on incomes between $30,000 and $40,000 was $40,689 in 2020. With rents and food prices rising as well, there’s not much room to maneuver.

Many shifts for in-person hourly workers are in large distribution centers, commissaries, stadiums, and warehouses outside of city centers. Public transportation may not reach these locations easily, so driving is often the preferred option for workers. With higher gas prices, we want to know if they're willing to drive as far for a shift.

Here's a summary of average one-way commuting distances in June 2021 and June 2022 for workers on our platform in major metropolitan areas across the United States: 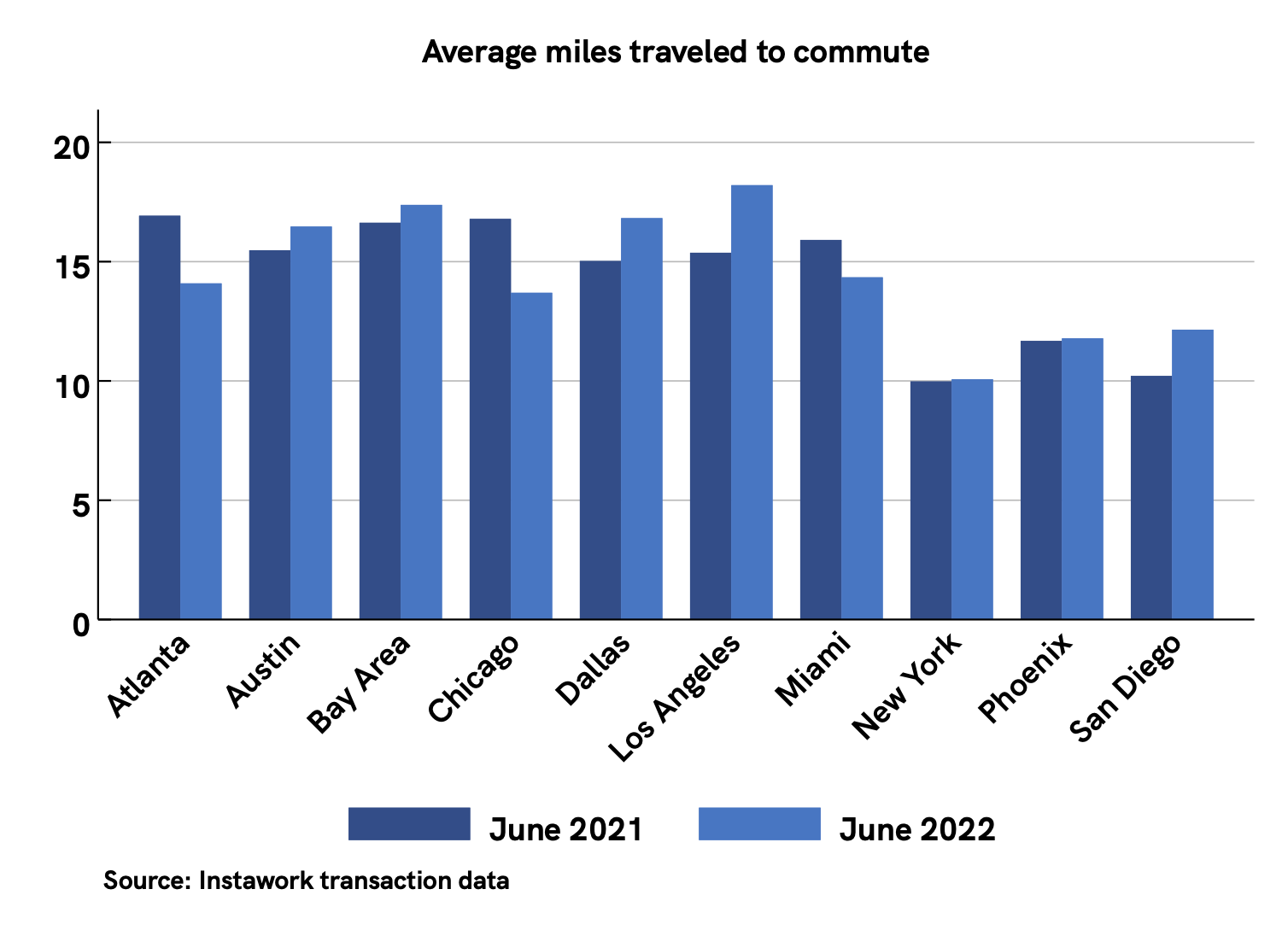 These distances are approximate; we calculate them by measuring the distances "as the crow flies" from workers' homes to the workplaces where their shifts will take place. Average commuting distances actually rose notably in five of ten metro areas, and just slightly in two others. They only dropped in Atlanta, Chicago, and Miami.

But the distances themselves only tell part of the story. We know from talking to our business partners that some have raised hourly pay to offset higher gas prices for their workers. So what we really need to ask is whether workers' willingness to commute a given distance for a given amount of money has changed. One way to look at this is to measure the average round-trip commuting distance per dollar earned at the shift: 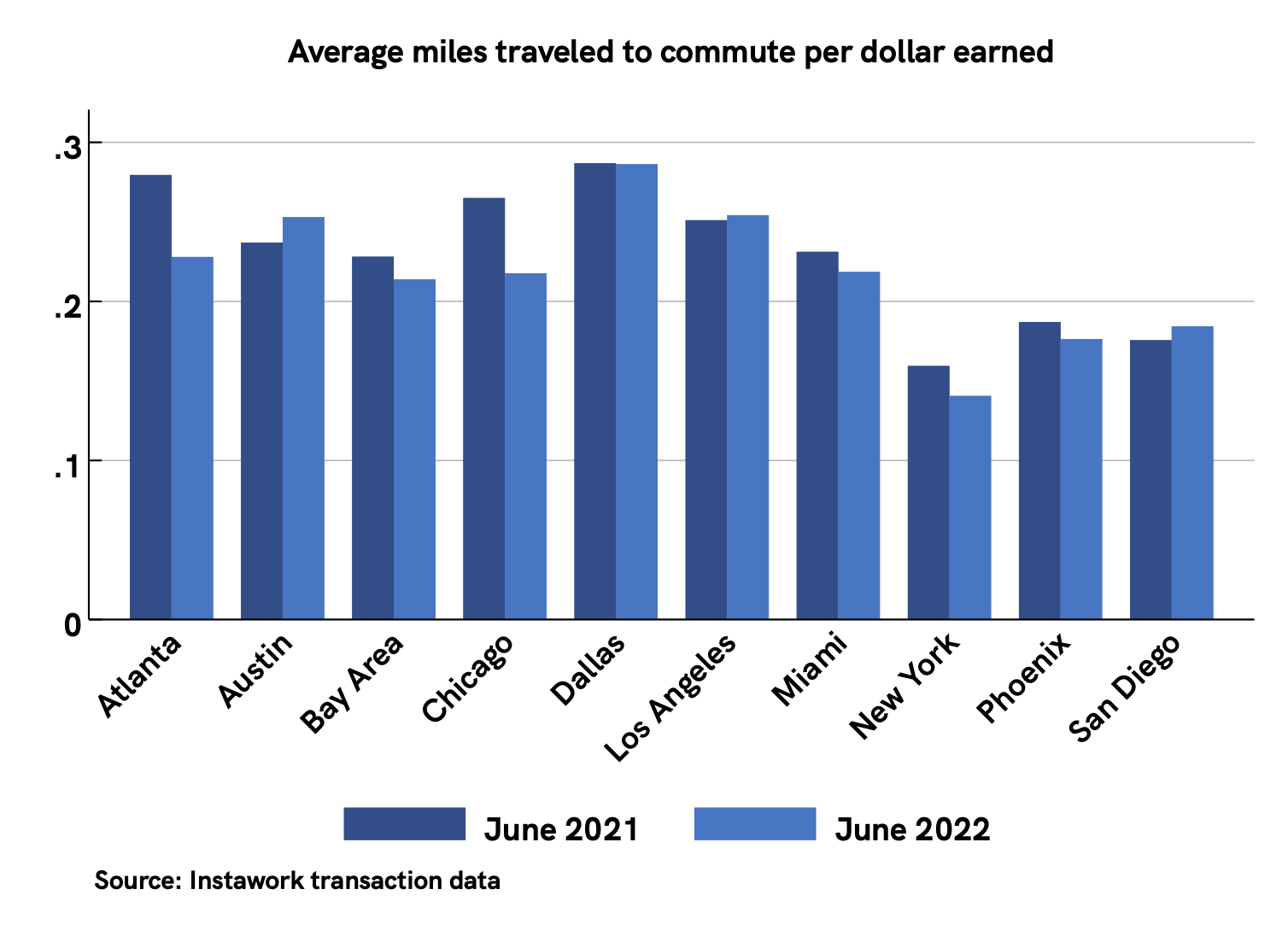 Here, for example, workers in Miami travel an average of roughly 0.2 miles per dollar earned. A 15-mile commute – which is a 30-mile round trip – might correspond to about $150 in total pay, or $18.75 per hour for an eight-hour shift.

This chart paints a very different picture. Average miles traveled per dollar in pay fell in six metro areas – even in New York, where only about 60% of our workers are drivers – and was roughly unchanged in two more. Only in Austin and San Diego did it rise slightly.

It's possible that the continued use of our platform, and the expansion in our pool of business partners, led to longer average commutes over the past year. But after gas prices rose, workers were apparently less willing to travel as far for the same amount of pay.

In order to maintain fill rates and the quality of working relationships, businesses may need to compensate workers for longer commutes – especially when their sites are located far from residential centers.

These metrics, derived from data aggregated across the Instawork platform, compare the two weeks starting 6/16/2022 to the previous two weeks. To control for the overall growth of the Instawork marketplace, only shifts involving businesses that booked shifts in both periods are included: