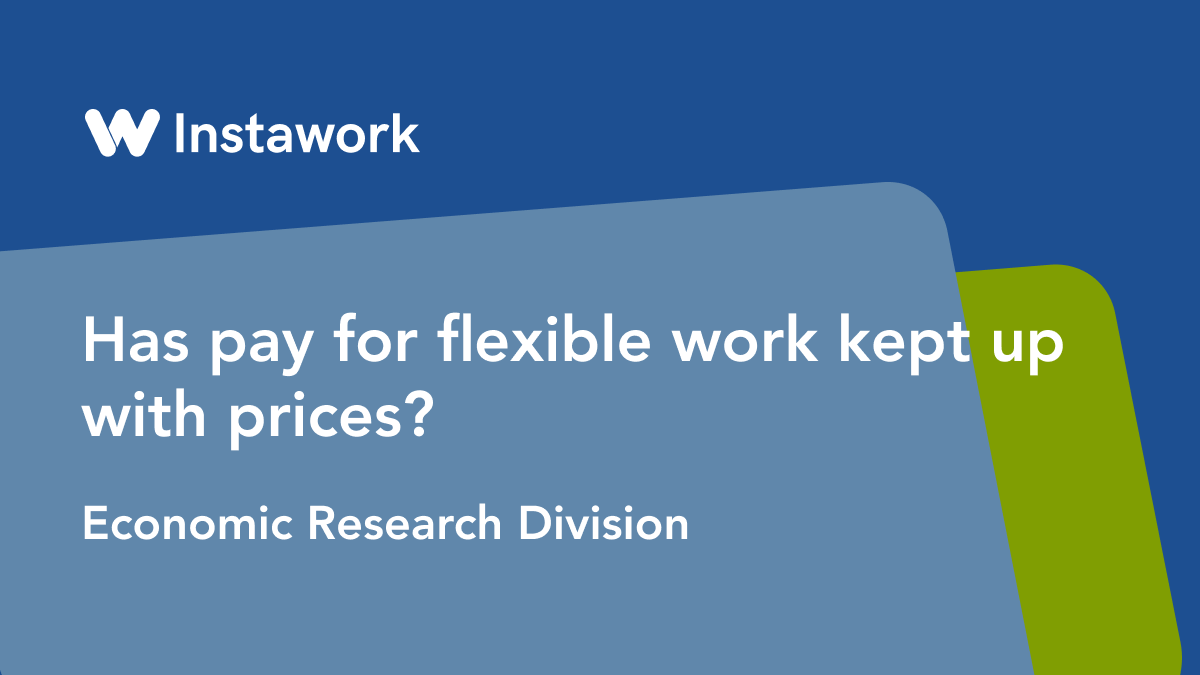 Last month the Bureau of Labor Statistics (BLS) recorded the highest year-on-year increase in consumers prices since 1981, a whopping 8.5% for people who lived in or around cities across the country. Workers' pay had to rise by the same amount to keep their standards of living from dropping, and in February the Wharton School published research suggesting that pay did keep up – except for low-income workers. Is flexible work any different, and what will happen next?

The first thing to realize here is that the national picture for pay can obscure a lot of variation at the local level. We know that labor markets across the country have been very different during the pandemic, and we shouldn't expect consumer prices for goods and services sold worldwide to move in lockstep with those differences. There have also been differences by income level, as the Wharton researchers found, and even by role. Demand for labor has been higher in industries favored by the pandemic, like logistics and online retailing.

Changes in real pay have varied by region

To capture the local differences, we decided to track hourly pay for one role – entry-level warehouse associates – and compare it to the rate of inflation for consumer prices in metro areas across the country. For most metro areas, the BLS only reports consumer price levels every other month, so some of these series start in February 2021 and others in March 2021, and we used a midpoint between even or odd months for the missing data. We indexed both pay and prices to 100 in the first month of the series, so the subsequent months would show the total percentage changes since then.

Here are the trends in Dallas and San Francisco: 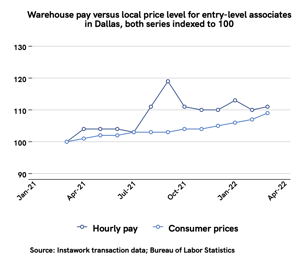 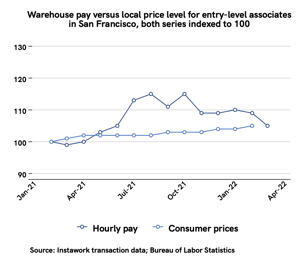 In both metro areas, hourly pay for flexible work in warehouses spiked in the summer of 2021 and then leveled out. But consumer prices (not seasonally adjusted here) kept rising all the while, eventually erasing the real gains in workers' hourly pay. A similar trend played out in Phoenix.

In two of the nation's biggest labor markets, Los Angeles and New York, prices and pay tracked each other much more closely – albeit with an edge for workers in New York: 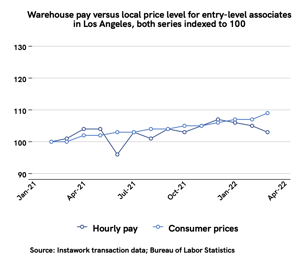 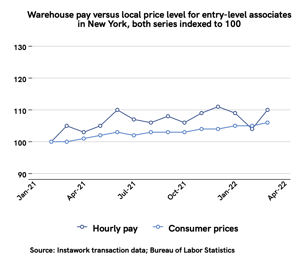 These two metro areas have had some of the highest unemployment rates in the nation (though still low by historical standards), and this may explain why there wasn't more of a spike in 2021. Pay rates may have been more elastic because of the relatively greater slack in the labor market.

Why did real pay increase so much in the Chicago area?

By far the greatest gains in real pay came in Chicago: 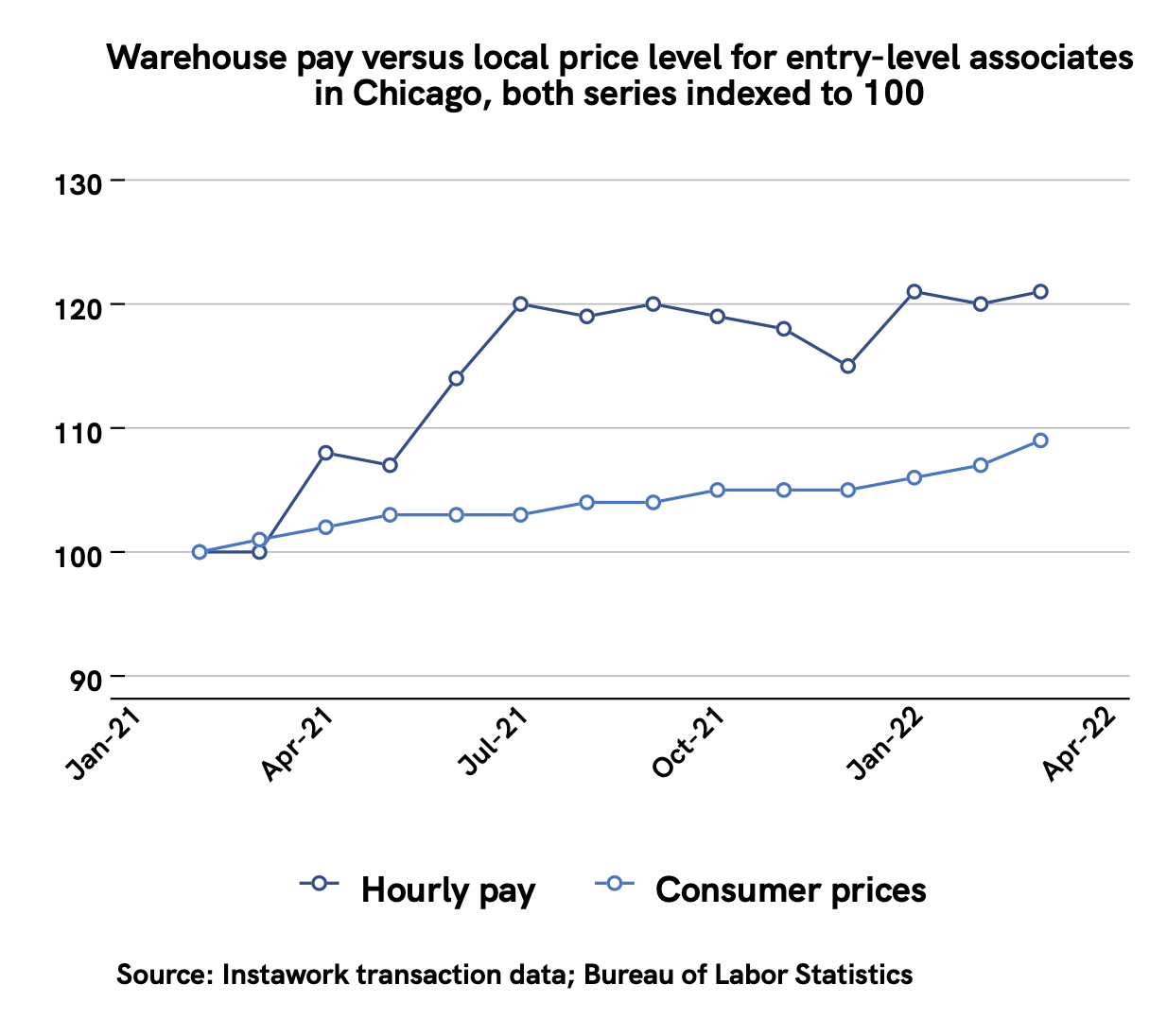 Flexible warehouse workers in the Chicago area have maintained an increase in real pay of more than 10% since February 2021, a number unmatched in any other major metro area.

One possible explanation is the Chicago area's shrinking population. The area has experienced significant emigration without attracting new residents at the same rate as, say, New York. Even though its unemployment rate is still among the higher ones for American metro areas, the emigration has apparently been concentrated among Black/African-American Chicagoans, who have also worked more than 60% of the warehouse shifts on the Instawork platform this year. For this industry, the departure of a crucial community may be driving pay upward faster than prices can keep up.

These metrics, derived from data aggregated across the Instawork platform, compare the two weeks starting 4/21/2022 to the previous two weeks. To control for the overall growth of the Instawork marketplace, only shifts involving businesses that booked shifts in both periods are included: