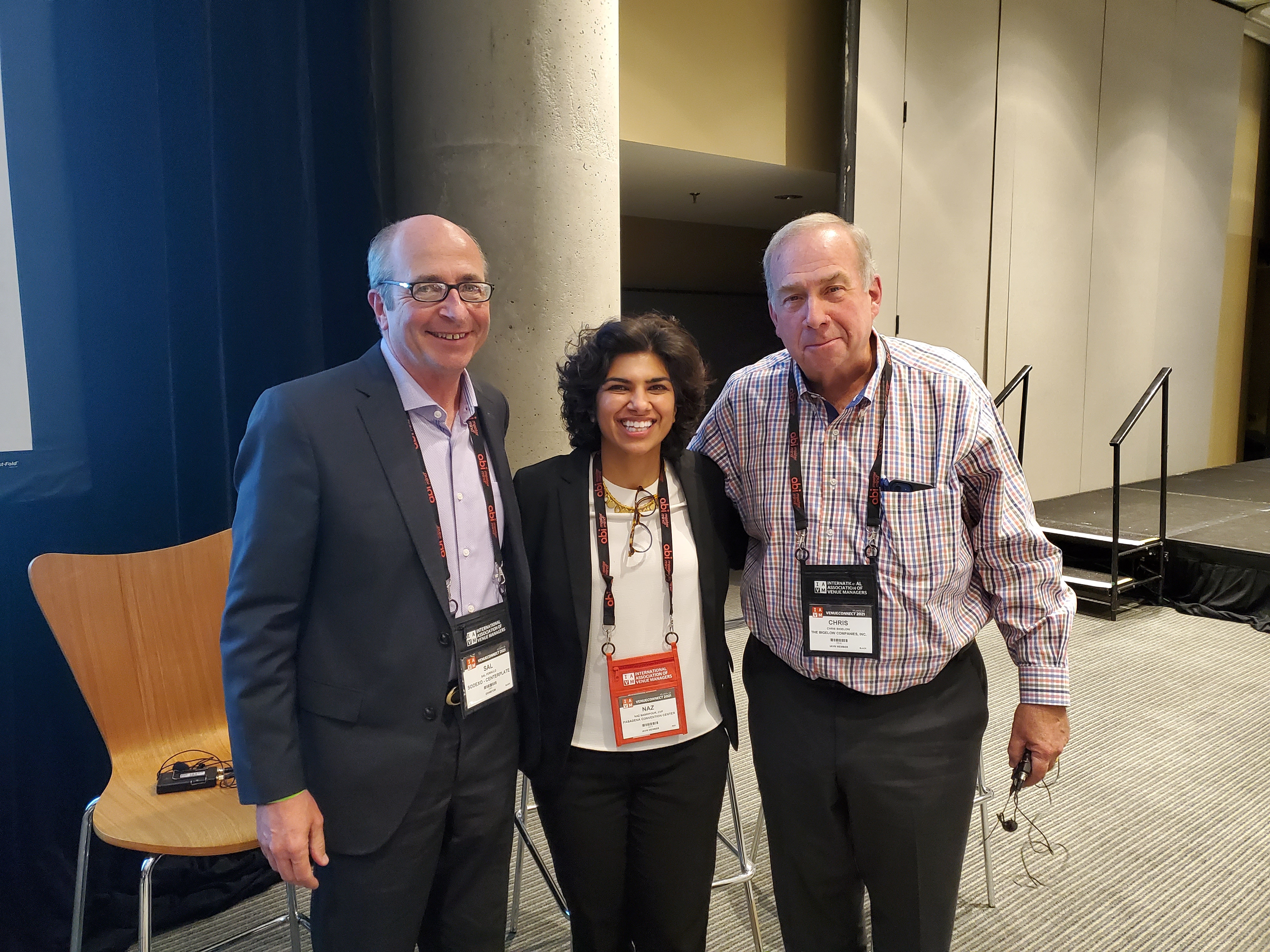 While safety protocols may still be in place, Americans are once again able to dine indoors, go to the movies, and even attend large events and conferences — welcome news for venue owners and managers, who were hit hard by earlier lockdowns.

In a panel at VenueConnect 2021 moderated by Instawork VP of Hospitality Partnerships Marc Caplan, we heard from Naz Sabripour, Executive Director of the Pasadena Convention Center; Sal Ferrulo, Executive Vice President at Centerplate, Inc., a Sodexo company; and Chris Bigelow, founder and owner of the Bigelow Companies. The accomplished crew shared strategies for venues that are gearing up for the events and conference seasons ahead.

In their conversation, they touched on everything from the industry forecast to the changes they’ve been seeing in the labor market to hiring and retaining loyal team members — here’s a brief preview of their session.

Recovering business, but not enough staff

Sabripour, Ferrulo, and Bigelow all shared cautious optimism about the outlook for events and conferences in the next year. At the Pasadena Convention Center, Sabripour said, a slow but steady trickle of events over the summer and fall is set to be followed by a packed schedule in early 2022 (particularly for consumer shows). She’s heard the same thing from other convention centers as well.

But labor shortages continue to be a major obstacle in the way of doing business. Ferrulo shared that it’s taking Centerplate two to three times as long to find enough staff for an event.

"[Before-COVID] you could probably recruit enough people in a month's time... now, it's taking us two or three months to pull the levers."

To ensure they’re not too shorthanded, the company has often turned to flexible staffing through Instawork to supplement their core crew.

The panelists noted that many long-time hospitality workers have left the industry altogether. Sabripour pointed to a recent Wall Street Journal article that profiled hospitality workers laid-off during lockdowns who have since turned to more stable professions — and who don’t plan to come back.

Around the country, Bigelow said, operators have told him that “core staff and hourly supervisors are saying, ‘You know what, I don't want to be in the food business anymore. For about a year now, I've had weekends off, I've spent time with my family… maybe food and beverage isn't a great business to be in.’”

“It's that group in the middle that's got that talent that we've lost,” Ferrulo agreed.

And in the meantime, venues, events businesses, and catering companies are trying to adapt.

Making do with smaller staffs — for now

As businesses slowly grow their staffs, they’ve found a number of ways to make things work with fewer employees. One of the best ways to do that, panelists agreed, was to embrace more self-serve models.

When events first started to come back, many of Centerplate’s clients were opting for pre-portioned individual servings to reduce the amount of contact attendees had with one another. But as time goes on, they’ve been adopting lower-lift service methods like buffet-style catering, Ferrulo said.

“I think we're going to do more and more buffets, because we're not going to have the staff that we need,” he explained. “There's been lots of discussion around how to modify the menus to require less labor.”

Bigelow shared that some venues are even turning to automation to ease the burden on their workers. At a handful of soccer stadiums, he said, “their highest volume stands are ghost stands,” where vending machines hand out bottled beer. Others have pared down their menus to make it easier for the employees preparing the food, and some have gone cashless to streamline the checkout process.

“Having less cashiers and having the customer do more of the work is just going to continue to grow,” Bigelow said. But while useful in the short term, “the technology isn't cheap,” he added.

In the end, automation isn’t really a sufficient substitute for long-term personnel solutions like hiring and retaining more workers.

Winning over new workers while retaining your existing crew

Ultimately, short-staffed companies must figure out how to appeal to potential employees. One of the most important tactics right now is increasing pay, the panelists agreed. In some markets, Ferrulo said, venue and events workers applying to new jobs are seeing as much as a 30% increase in pay. Eventually, Bigelow predicted, this will pay off.

“I think [employees will] say, ‘Okay, I've had a nice sabbatical, but now I want to get that extra spending money, so I'll go back,’” Bigelow said.

To offset these higher labor costs, as well as higher raw costs, events and catering companies will likely have to increase their prices. While this can seem daunting — no one wants to price themselves out entirely, after all — it’s so widespread that companies shouldn’t be scared off, Sabripour explained.

“If you go to Subway or Rubio's, there’s easily a $2 increase on every single item, so it's all across the board,” Sabripour said. “It's grocery stores as well, department stores… everything's just at a higher price point.”

And although new hires are critical, you can't forget about the team that has been by your side. If long-time staff see new hires reaping all the benefits, they can become resentful.

“You have this core group of staff that may have carried you through the last year and a half…  but then we're trying to attract more people who have been reluctant to come back, and they're almost getting rewarded for it with bonuses and incentives,” Caplan explained. “How do you make the people that stuck with you feel valued when you're offering all these crazy things to attract new people?”

Some major companies are going to great lengths to retain their team. Ferrulo highlighted that certain McDonald’s locations are offering emergency childcare, while Marriott has instituted a policy for managers where schedules are split so that none of them have to work for more than 40 hours a week.

Even though most events and catering companies probably wouldn’t be able to pull off the same exact thing, they can offer a similar benefit: flexible schedules. This is critical right now, Bigelow believes, because many employees who are returning after extended leaves are saying “I may only work three days a week instead of seven.”

Indeed, flexibility is a major perk for U.S. workers — in fact, one 2019 survey found that 83% of workers would choose a job that provided flexible hours over one that didn’t. It’s one of the main reasons employers find so many qualified professionals by posting on Instawork: with the freedom to pick up shifts whenever and wherever works best for them, workers flock to the app.

Of course, perhaps the most important thing you can do to retain workers is treating them well. Top professionals on Instawork, for example, are rewarded with Instawork Gold — a program that offers bonuses, early access to shifts, and quicker payment. Businesses will need to find their own ways to incentivize employees, or they risk losing them, Ferrulo cautioned.

“The biggest challenge I think we as a group are going to face is re-instilling that loyalty,” he said.

After a long and challenging past eighteen months, it makes sense that venues, events companies, and caterers might be nervous about the road that lies ahead — but the good news is that the hardest part is likely over. If you’re proactive in your hiring and retention efforts, it’s only a matter of time before you build up a staff that will allow your business to thrive again. And if you need help with that, Instawork is happy to assist.

How to enjoy flexible work along the Golden Coast this summer