The Boston area has some of the highest pay rates in the nation for flexible workers, with Pros on the Instawork platform earning more than the MIT Living Wage for single people without children. Demand for flexible work has also been rising steeply, with a 21% increase month-on-month for Boston businesses in August. Here we look at some of the longer-term trends in the Boston labor market.

The Boston area has some of the highest pay – and highest consumer prices – in the United States, with hourly workers paid an average of $36.95 (and a median of $29.13) in 2021, according to the Bureau of Labor Statistics. The Boston area also has one of the tighter labor markets in the country, with an unemployment rate of 3.1% in July, slightly below the national rate. So it's no surprise that flexible workers  are benefiting, with hourly pay on the Instawork platform averaging close to $24 an hour: 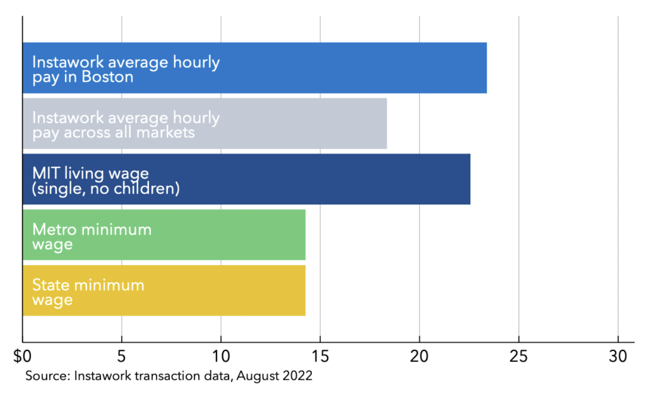 (For a realtime pulse of the labor market in the Boston metropolitan area, including pay rates, demographics, and demand for flexible work, please visit our local labor market page.)

Long-term trends in the labor market

In this Labor Market Focus, we take a broader view of the labor market's development in the past and where it may be going next. 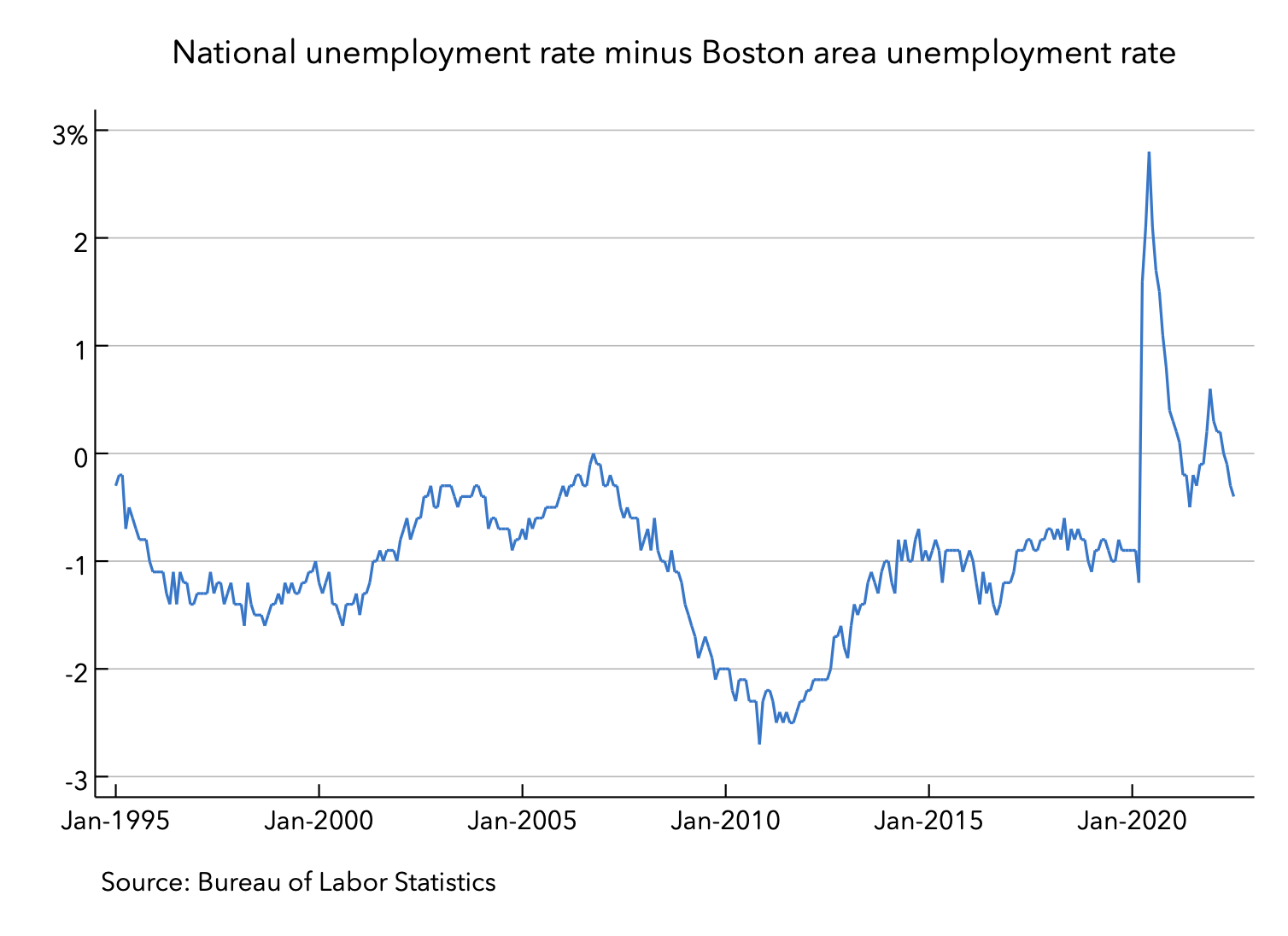 Covid-19 changed all of that. In fact, the situation reversed, as unemployment rates in the Boston area were two percentage points higher than the national rate throughout the first year of the pandemic. The usually thriving leisure, hospitality, tourism, and education sectors were among the hardest hit. Sports competitions were on hold, as were musical performances and museum admissions. Tourism ground to a virtual halt, and universities – which accounted for close to 50,000 jobs in the city of Boston alone – weren't able to host students for in-person learning.

Thousands of people in the Boston area were forced out of the labor force altogether as childcare facilities closed or raised their rates to attract workers in the tight labor market. This change affected women especially, and their participation in the labor force has only recently recovered. While the number of people working has recovered to pre-pandemic levels in the nation as a whole, the Boston area still has a shortfall of roughly 50,000 jobs:

We know that this shortfall was not a result of people leaving the Boston area. According to the Census Bureau's estimates, the metro area's population grew by about 27,000 people between 2019 and 2021. People have simply chosen not to work.

Divergence in the service sector

It goes without saying that most of the impact of this change came in the service sector, which accounts for roughly 90% of jobs in the Boston area. But experiences have differed widely within the sector.

As of July 2022, with the pandemic being treated more as endemic, jobs in education and health care had almost fully recovered. These jobs represent more than a fifth of the labor market. Jobs in information services, a crucial support for remote working, were actually ahead of pre-pandemic levels.

By contrast, jobs in leisure and hospitality were down by about 30,000, reflecting the nationwide trend for those industries: 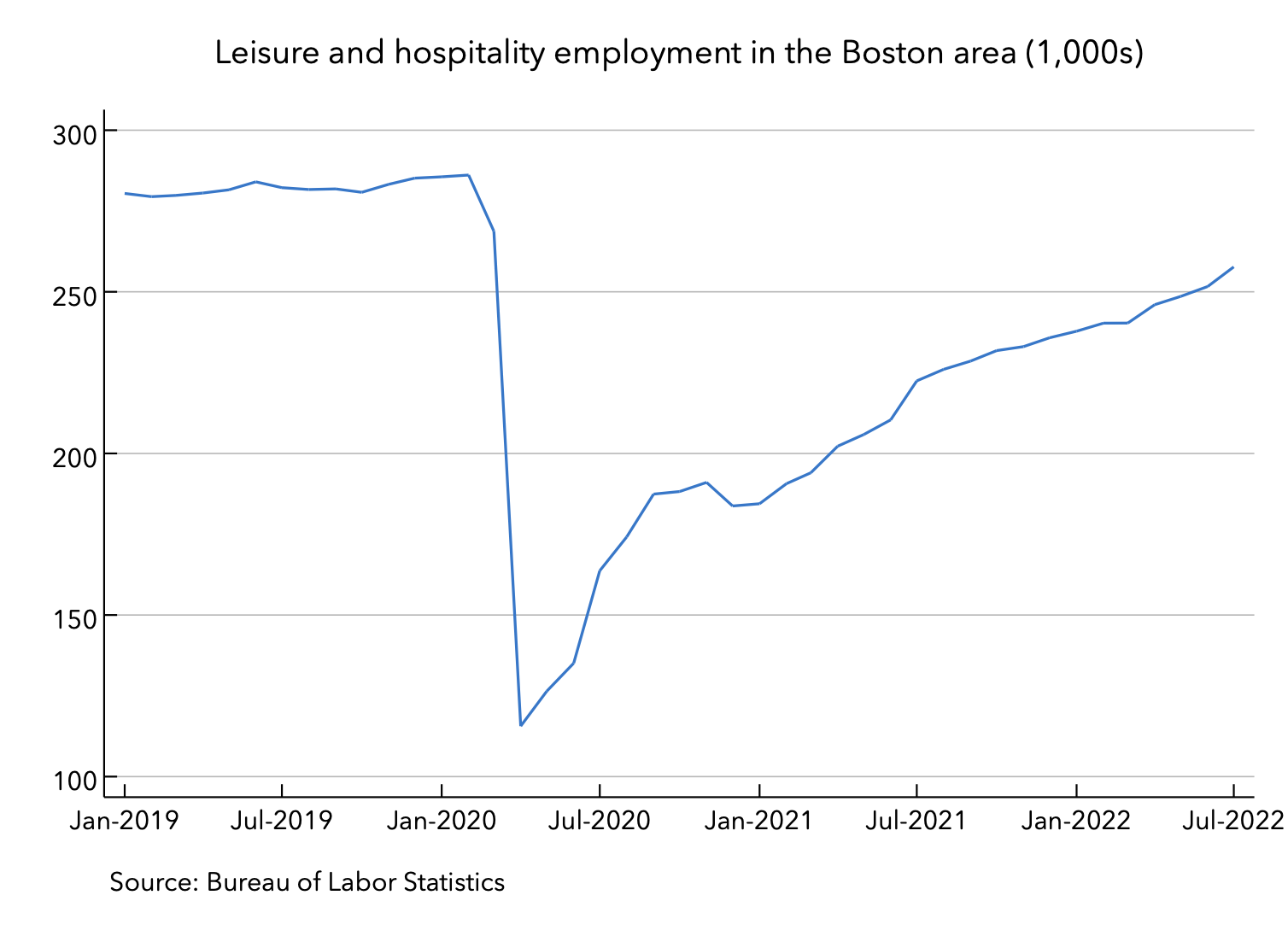 Considering that more than 50% of these jobs had disappeared in the early days of the pandemic, a net decline of roughly 11% may not seem so bad. And indeed, the trend continues upward, so all of these jobs may eventually be recovered.

The labor market for flexible work was at its tightest in Boston in April 2022. Our Pay Signal Index was reading 83, indicating that vast majority of businesses were intending to raise pay. It fell in May and June but has been rising through summer, indicating a labor market that has begun to tighten again.

As students return to campuses, the part-time labor supply will increase (among some students), but so will the demand for services (among all students). We anticipate that the demand for flexible work will continue to rise.

These metrics, derived from data aggregated across the Instawork platform, compare the two weeks starting 8/25/2022 to the previous two weeks. To control for the overall growth of the Instawork marketplace, only shifts involving businesses that booked shifts in both periods are included:

Introducing the first State of the Flexible Workforce report