Even before the Covid-19 pandemic, the San Antonio metro area was one of the fastest-growing in the United States. Since 2020, it has continued to pick up new residents, and by 2021 it had the biggest increase in population in the nation. New arrivals – especially working-age families with children – always need services like health care and education, so they typically drive job growth in those areas. And the San Antonio area has seen this repeated in spades.

How did it start?

San Antonio has long been known as Military City, USA on account of its three centuries of association with the American armed forces. The metro area now hosts more than half a million personnel, in an overall population of more than 2.6 million. Yet in the more recent past, San Antonio has begun attracting and spawning technology companies, many related to defense, cybersecurity, and other kinds of information management. While Austin may be better known as the "Texas Silicon Valley," San Antonio has its own pull.

With the development of technology comes the need for education. So it's no surprise to see a sharp uptick in education jobs:

Notably, jobs in education were on a steep upward climb until roughly 2016, when the trend started to flatten. But just before the pandemic, they ticked up again, and since then they have been on their steepest trajectory ever.

A similar dynamic has occurred in the labor market for ambulatory health care services – the kind of care that doesn't require a hospital stay:

Yet employment in hospitals did not mirror this trend. In fact, there are fewer people working in hospitals in the San Antonio metro area now – about 25,000 – than there were before the pandemic began. This suggests, again, that the people moving to the area are not older retirees but rather younger people who receive most of their health care on an outpatient basis.

The growth of San Antonio's labor force may be a shot in the arm for businesses in the area, but it's not all good news for workers. The influx of new residents may actually be pushing down wages, when adjusted for inflation. Here's a measure of average hourly earnings in the area divided by consumer prices, indexed to 100 in 2010: 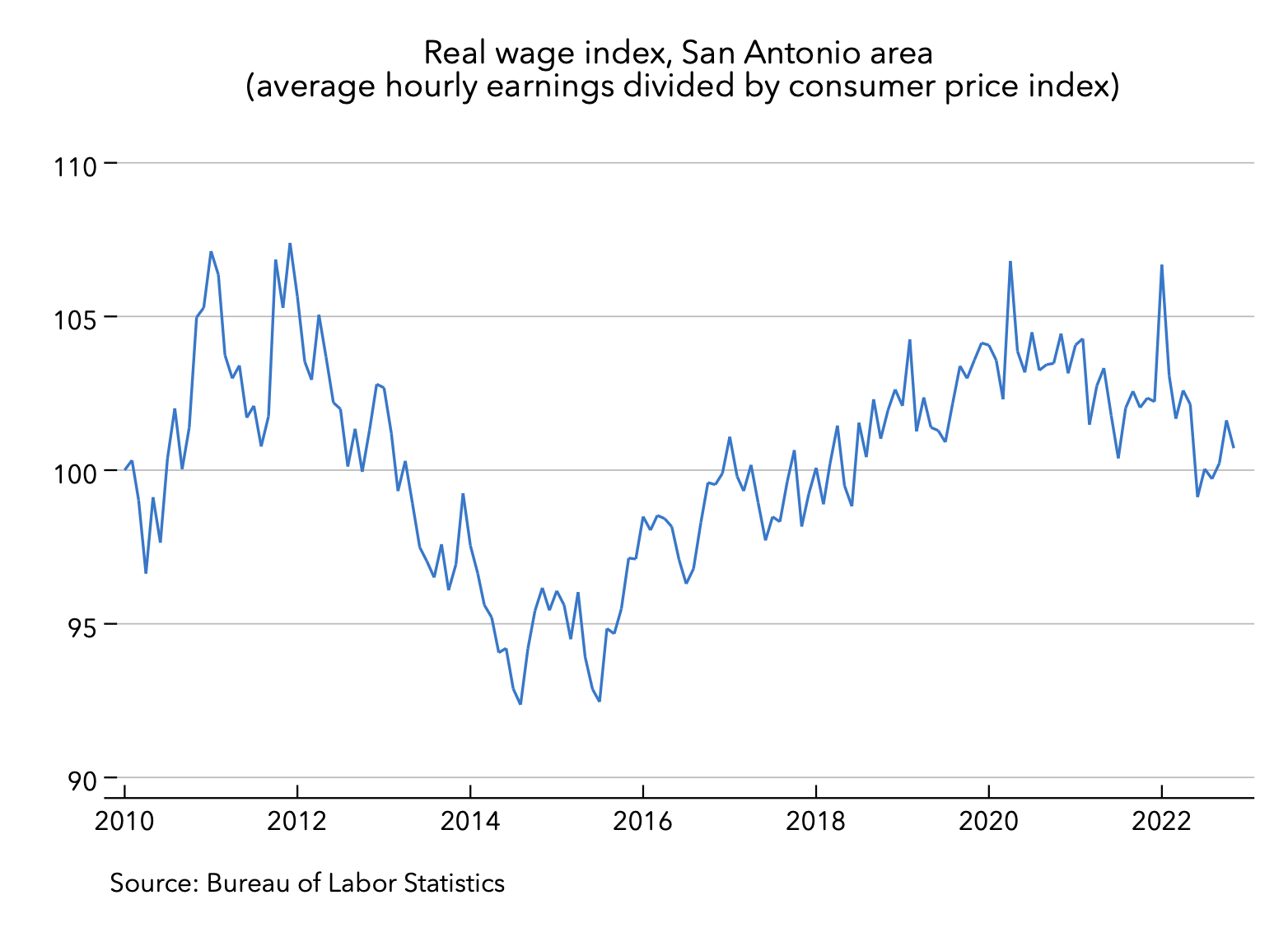 This is a noisy chart, since the Bureau of Labor Statistics doesn't offer seasonally adjusted data for hourly earnings. But we can see that real wages peaked around 2012 and then fell until 2016 – exactly the time when jobs in education and health care stopped growing quite so quickly. Then real wages peaked again at about the time the pandemic began before falling almost all the way back to where they started in 2010.

The periods when employment in education and ambulatory health care slacked off were also the periods when workers' spending power grew. The data strongly suggest that slowdowns in the growth of the working-age population were driving the changes.

Of course, metro areas across the country have seen falling real wages lately because of high inflation. But inflation wasn't so high early in the pandemic, when growth in real wages had already stopped despite the shortages in the labor market and the additional risks of going to work. It's just Econ 101 – when supply (of labor) increases, the price (pay) goes down.

Another thing to notice in the chart above is the big spike in real wages during the winter of 2021-22. This was at the height of the first Omicron wave of Covid-19 infections, when rashes of call-outs led to urgent demand for labor and high overtime hours across virtually every sector of the economy.

At Instawork, we felt the effects directly as businesses booked numerous shifts on short notice using our platform. When their workers were sick, they relied on flexible labor to fill the gaps – and they were willing to pay for it. We may see a similar dynamic this winter, with a new and more infectious strain of the Omicron variant making the rounds. As always, we'll be ready to help businesses fill their staffing needs, whenever they occur.

These metrics, derived from data aggregated across the Instawork platform, compare the two weeks starting 12/22/2022 to the previous two weeks. To control for the overall growth of the Instawork marketplace, only shifts involving businesses that booked shifts in both periods are included: