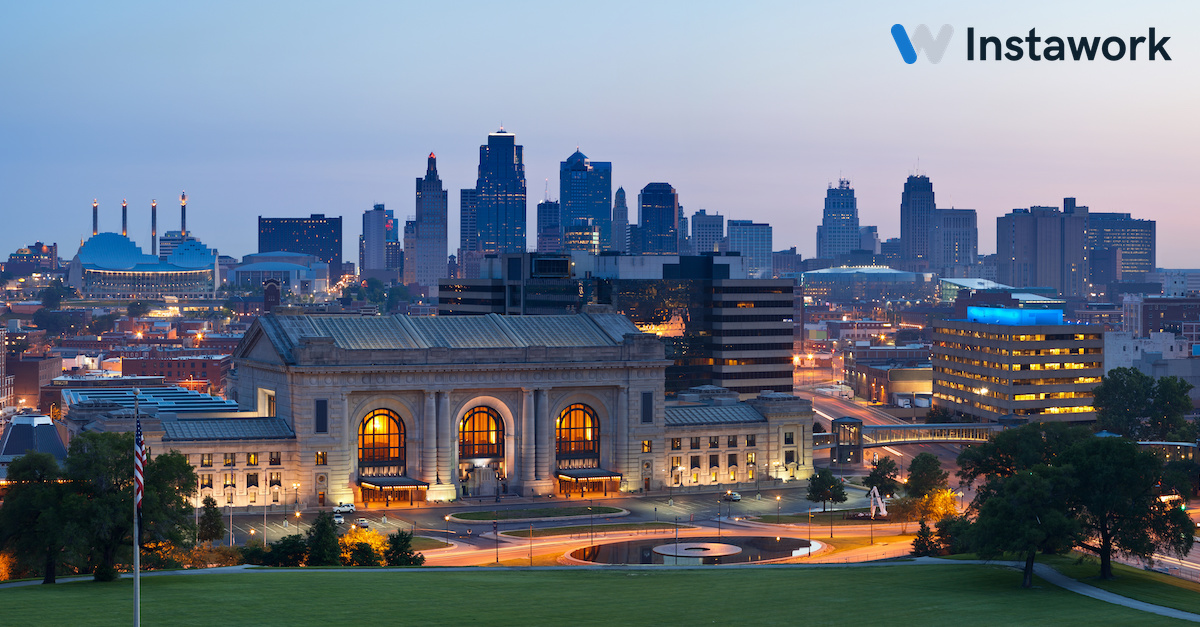 The Kansas City metropolitan area has been one of the strongest labor markets in the country for more than a decade. So it was puzzling when the unemployment rate started to rise in early 2021 while the nation as a whole saw joblessness fall. What happened next was the sort of experiment economists dream about.

Kansas City has been a nexus of commerce in North America for centuries – first by river, then by rail, and eventually by air and even electrons. The city's central location in the United States and importance as a logistics hub have helped its increasingly technology-driven economy to thrive. Against this backdrop, demand for flexible work in the Kansas City area, which covers parts of Kansas and Missouri, has been strong and growing.

With a flourishing labor market since the Great Recession, the Kansas City area has typically had lower unemployment rates than the nation as a whole: 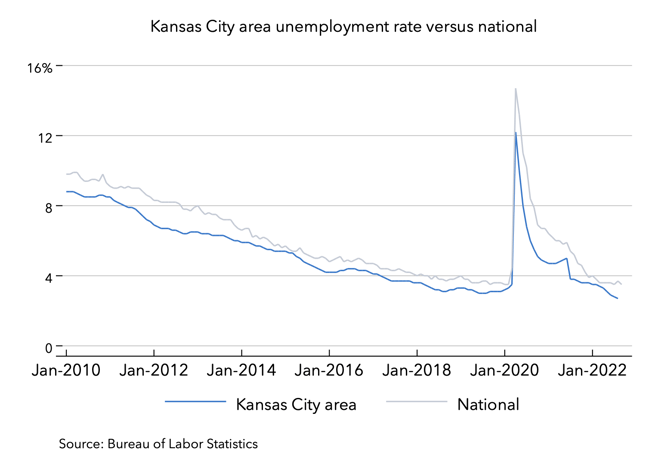 This was true during the early days of the Covid-19 pandemic as well. Unemployment continued to be lower than the national average by roughly two percentage points.

In 2021, however, something unusual happened. The unemployment rate in the Kansas City area flattened at 4.7% early in the year and then started to increase, bucking the national trend. At the time, some analysts suggested that the stimulus checks and enhanced unemployment benefits provided by the American Rescue Plan Act were discouraging people from working. And in May, citing labor shortages, Governor Michael Parson of Missouri announced that his state would stop offering the additional federally subsidized unemployment benefits in the following month.

After jobless benefits, then what?

There is a long economic literature on the incentives created by unemployment benefits, and we have noted previously in this space that job search tends to intensify just before benefits run out. But unemployed people usually have six months to plan for the end of benefits. In this case, workers in Missouri had one month to plan before losing the federal subsidy, in the form of an extra $300 per week and longer-lasting benefits for many workers.

As research would have predicted, the number of unemployed people did drop in the Kansas City area after June 2021. In seasonally adjusted data, the figure fell from roughly 57,000 to 43,000 between that June and July: 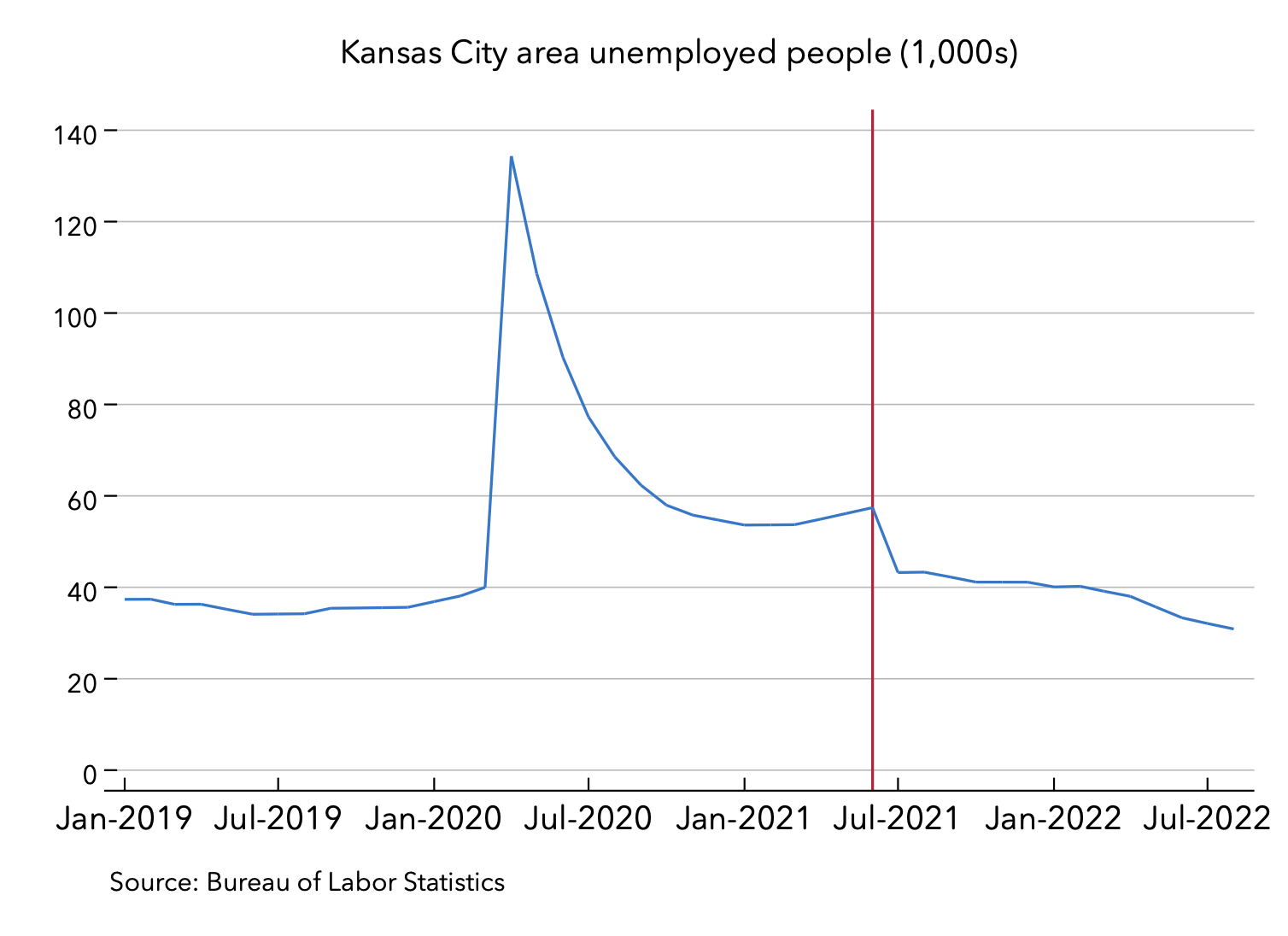 But as it turned out, these people did not simply get jobs. Many of them may have left the labor force altogether. Here's what happened to the size of the labor force in the Kansas City area during the same period: 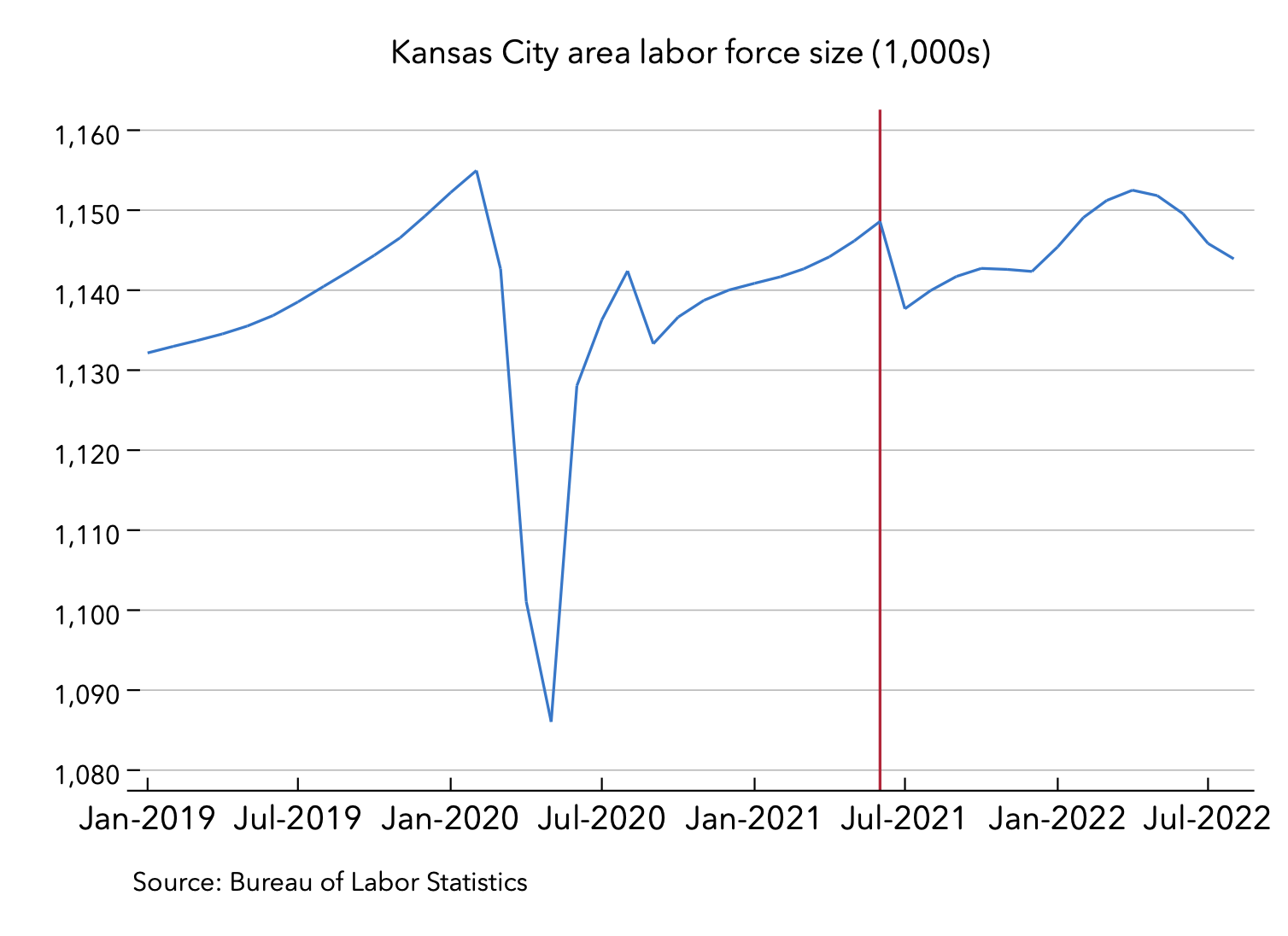 The overall size of the labor force fell by about 11,000 people, reversing the upward trend that had prevailed since September 2020. These people leaving the labor force represented more than three quarters of the people who were no longer counted as unemployed.

Now, we can't know for sure that they were the same people. Other people were undoubtedly joining and leaving the labor force at the same time, and these seasonally adjusted numbers may somewhat cloud the true picture of what happened between June and July in 2021. In fact, seasonally adjusted numbers from the Bureau of Labor Statistics suggest that payrolls grew by 20,000 in the Kansas City area in the same period, which doesn't square with the other numbers at all.

So what really happened? We can find out by looking at non-seasonally adjusted numbers county by county. Here's how the size of the labor force compared between June 2021 and July 2021 for each county in the metro area:

That's probably because the expanded benefits continued until September in the state of Kansas. It seems likely that more people left the labor force in Missouri after the benefits were revoked, slowing the usual seasonal trend. But at least the unemployment rate in the entire Kansas City area stopped rising.

A growing role for flexible work

Not everyone who the government records as leaving the labor force has actually stopped working. People who rely on flexible work may happen not to be working – because of vacation, illness, or personal choice – in the weeks when surveys reach them. In this case, they are counted as outside the labor force.

This is not true for people with permanent positions, but it may be true of an increasing number of workers. Among the occupations expected to grow the most in the Kansas City area between 2020 and 2030, according to the Missouri Economic Research and Information Center, are restaurant cooks, entertainment attendants, and venue workers – all roles that have had shifts booked on our platform.

Flexible work will only grow for these roles, and the data in our State of the Flexible Workforce report show that a third of flexible workers on our platform do not want a full-time position. We'll continue to serve these people and others by expanding in the Kansas City area... on both sides of the state line.

These metrics, derived from data aggregated across the Instawork platform, compare the two weeks starting 9/22/2022 to the previous two weeks. To control for the overall growth of the Instawork marketplace, only shifts involving businesses that booked shifts in both periods are included: