Does a rising economic tide in Florida lift all boats? 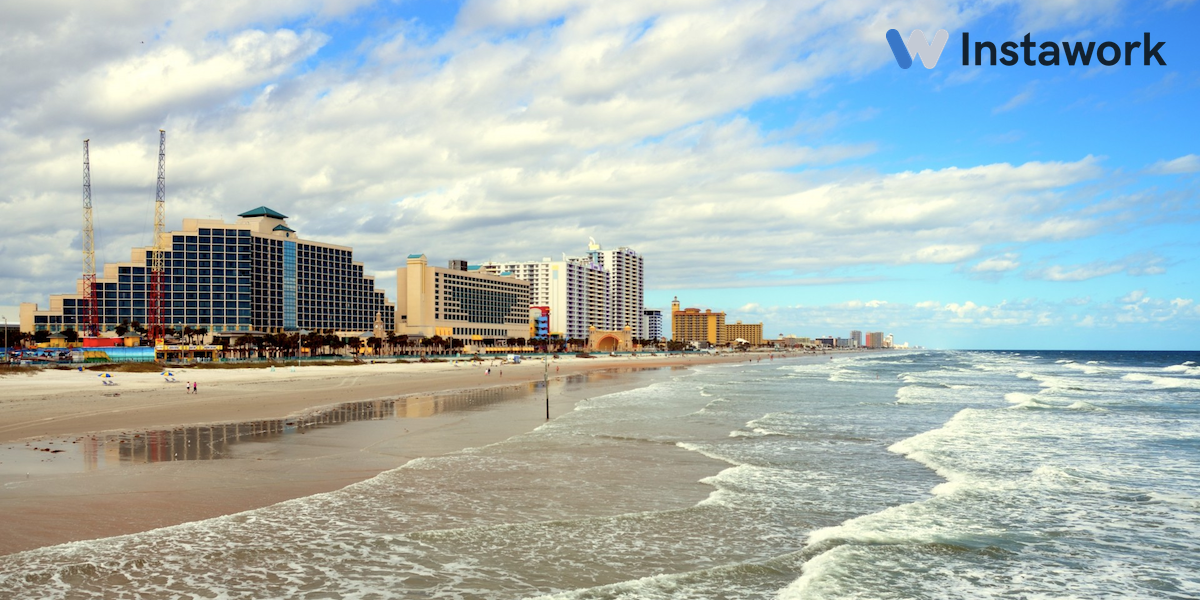 What pandemic? Despite the tragic loss of more than 84,000 lives to Covid-19, Florida's economy has surged forward in the past couple of years and is now ahead of its pre-pandemic trend. Its four biggest metropolitan areas have some of the lowest unemployment rates in the country, with more people employed than before than pandemic began. But they're not all growing in the same way.

Before the pandemic, Florida's economy was growing at a pace of more than 3% per year (adjusted for changes in prices), which was a whole percentage point faster than the American economy as a whole. In fact, the state's gross domestic product is now above its trend from 2014 through 2019:

Propelling this surge was an increase in Florida's population of more than 700,000 people, or roughly 3% of current residents, between April 2020 and April 2022. So a substantial share of Florida's economic growth has come simply from getting bigger, not necessarily from making its people more productive.

Indeed, despite raising its minimum wage to $11, the state has seen little change in workers' buying power. (Only 0.1% of Florida workers earned exactly the minimum wage in 2021, anyway.) Dividing average hourly earnings in Florida by the consumer price index – the national index, which is the only one available monthly – gives us an idea of what pay has really been worth in the state: 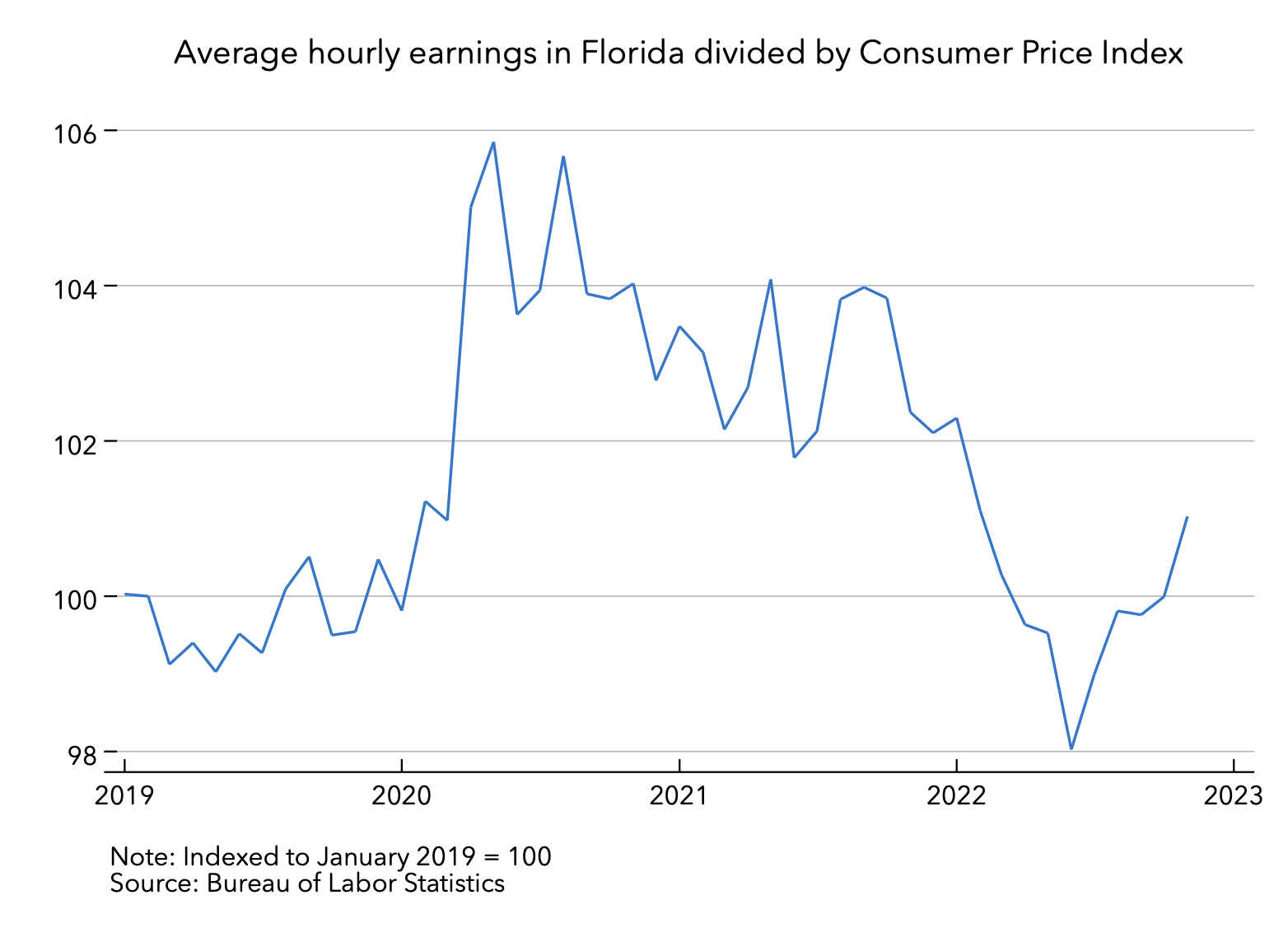 Buying power did rise by almost 6% early in the pandemic, when Covid-19 infections were spreading rapidly and businesses had to pay workers more to fill their staffing needs. But all of those gains had been erased by early 2022, and only recently has pay been bouncing back in real terms.

Indeed, pay in Florida has only just kept up with inflation, even though the jobless rates in the state's major metro areas have been running well below the national average:

In such a tight labor market, it's not surprising that our business partners in the Miami, Orlando, and Tampa areas – as well as Jacksonville, where we are growing our presence now – have been expanding their use of flexible work. Our shifts are averaging about $16 to $18 an hour in these four metro areas, and the rates have been fairly stable over the past year. With little change in buying power despite the challenges of the pandemic, it's also not surprising that Florida's workers are looking for extra shifts to help make ends meet.

Depending on where they are, workers may find different skills in the highest demand. Here is how employment in leisure and hospitality has bounced back, taking January 2019 as the base period: 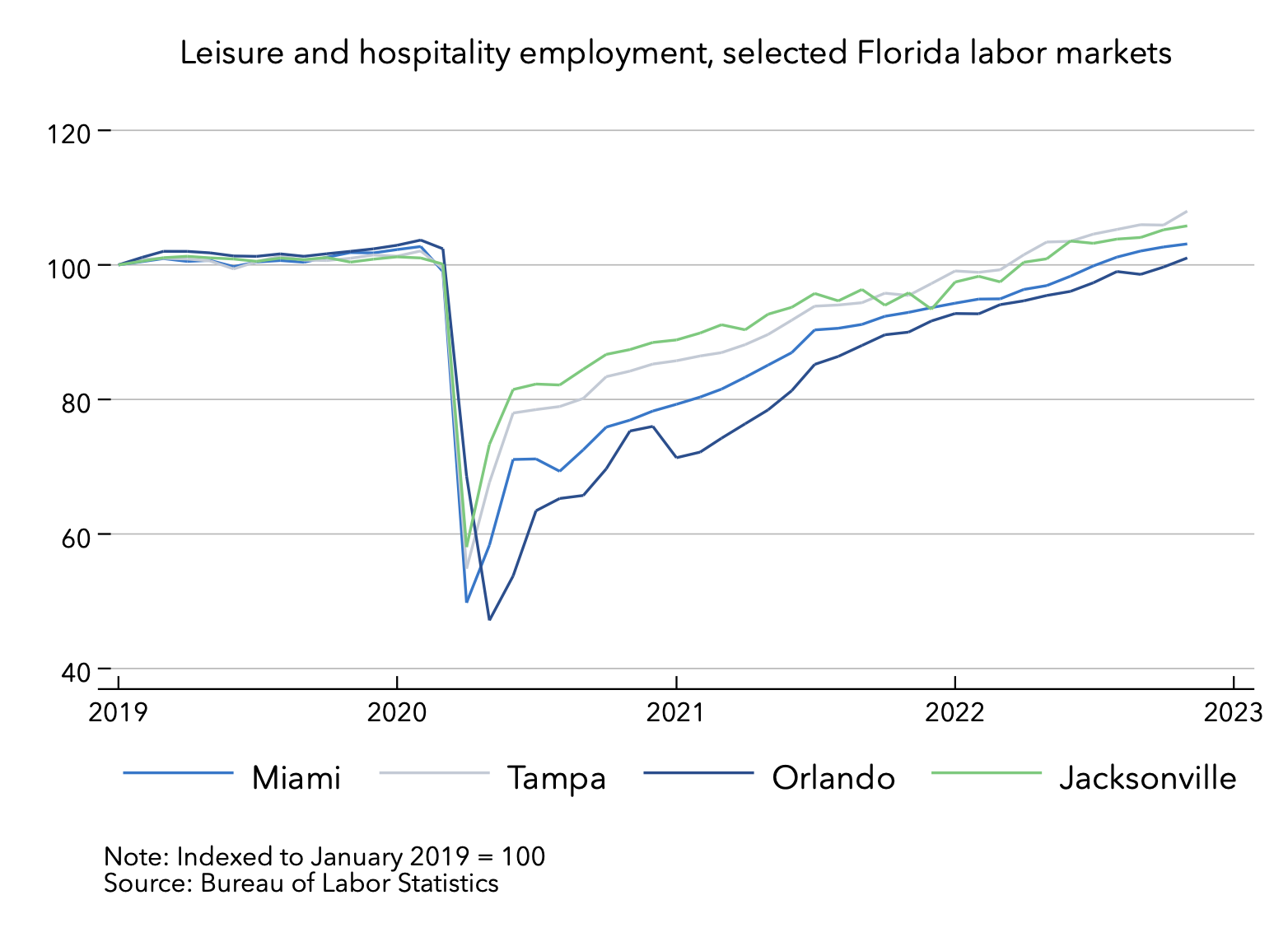 Orlando, the theme park capital, still hasn't recouped all of the jobs it lost to its biggest sector during the pandemic. Tampa and Jacksonville, which are more residential destinations, have actually seen the biggest increases in leisure and hospitality jobs. (Read more about Tampa's growth here.) If Tampa and Jacksonville are benefitting from new residents, it makes sense that they've created the most construction jobs as well, with employment in the industry up about 10% versus the 2019 numbers:

The dropoff in construction employment in Orlando is particularly noteworthy. The area did pick up new residents in the first two years of the pandemic, including an increase of about 3.6% in the population of Orange County. Rising demand for housing has made the city of Orlando one of the toughest rental markets in the nation. Yet builders are being cautious because of supply-chain problems and potential new regulations – and perhaps in the memory of how much they overshot in the years leading up to the Great Recession.

Retail trade is a third big source of employment in Florida, and it too is thriving in Tampa and Jacksonville more than in Miami and Orlando: 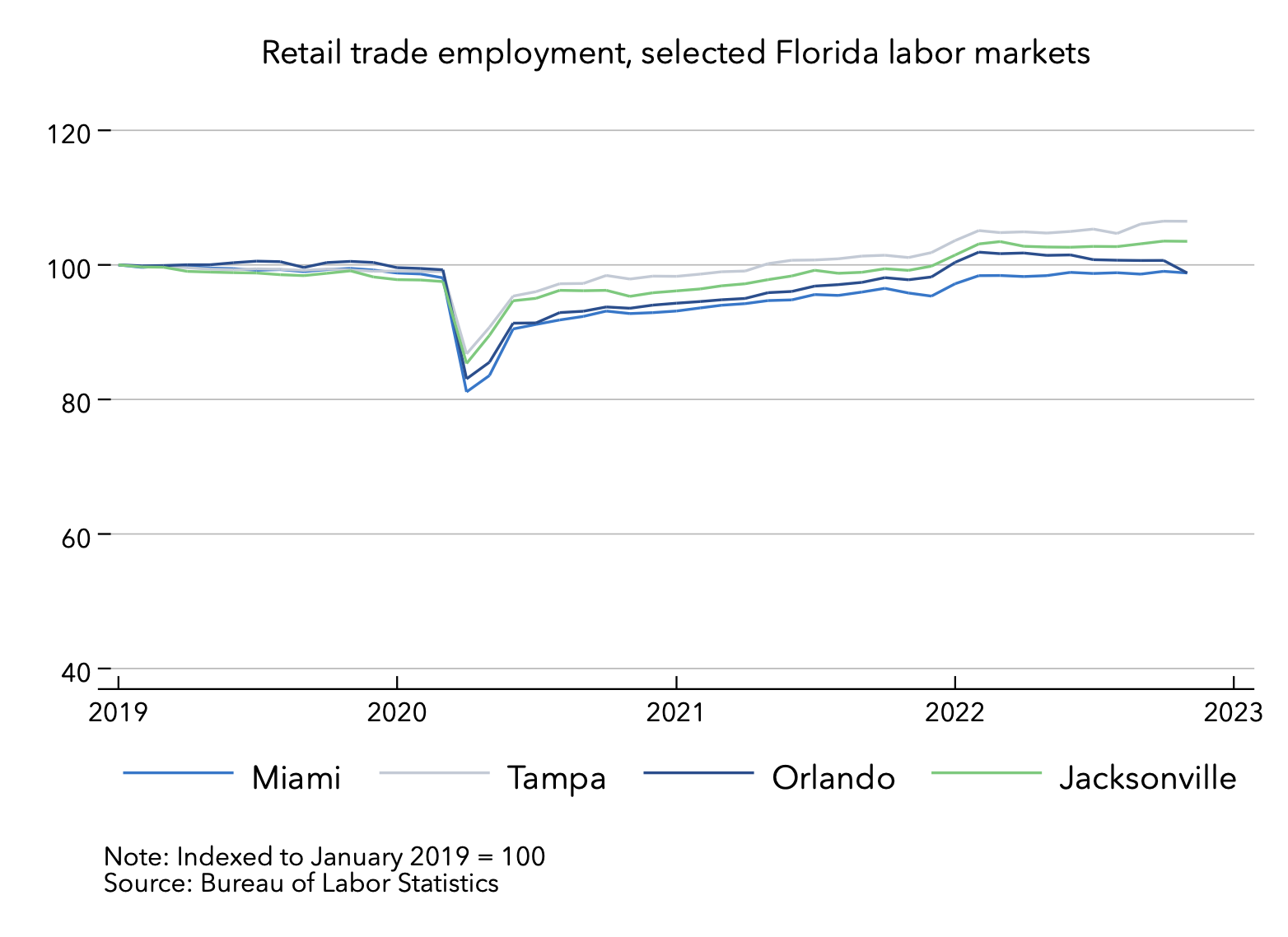 To varying degrees, these numbers are all signs of population-driven growth and an increase in total income across the state. The question is whether Florida can also grow in ways that make its people wealthier, through innovation and entrepreneurship. These channels are more challenging, but they would make the state's economy more robust in the long term.

These metrics, derived from data aggregated across the Instawork platform, compare the two weeks starting 1/5/2023 to the previous two weeks. To control for the overall growth of the Instawork marketplace, only shifts involving businesses that booked shifts in both periods are included: