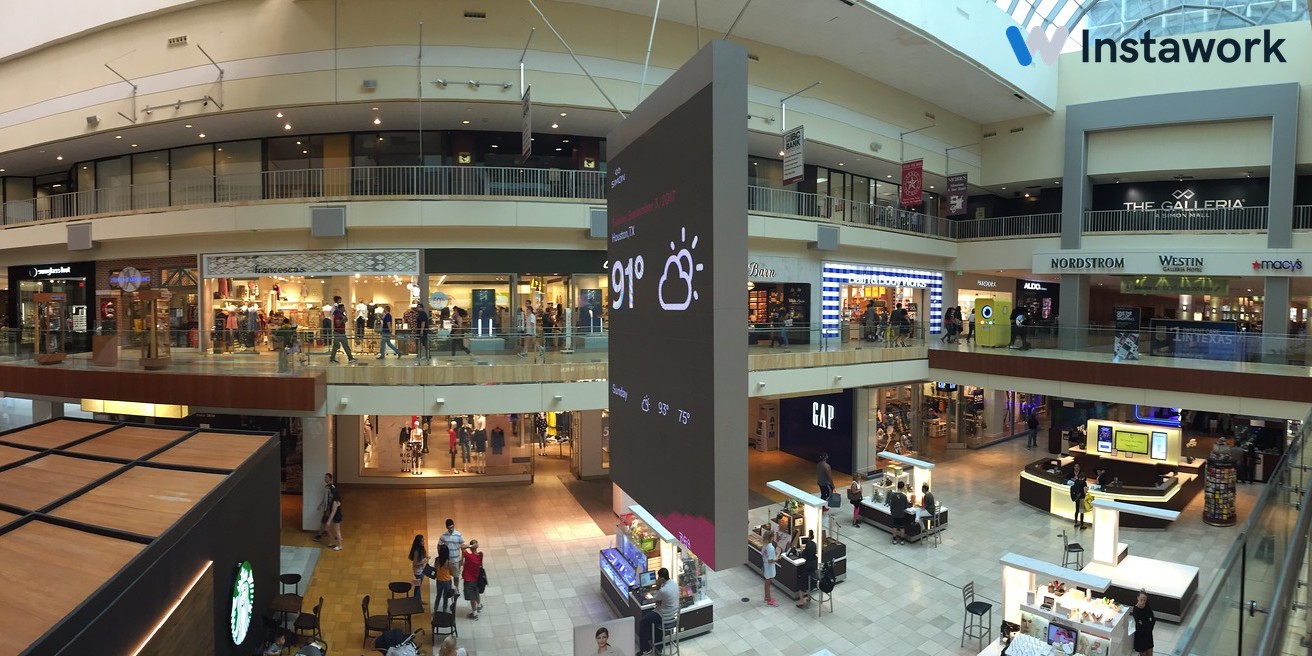 The Houston metropolitan area may be known for its involvement with oil and gas, but these days only 1% of the area's jobs come from taking those fossil fuels out of the ground. Of course, the petroleum industry as a whole still drives much of the local economy – and the profits of these companies appear to be underpinning a resurgence in employment.

Something's happening in Houston. At 4.1%, the unemployment rate in the metropolitan area is low by historical standards but still among the highest in the nation. In fact, it will probably take another year at least for employment in the private sector to catch up to its pre-pandemic trend: 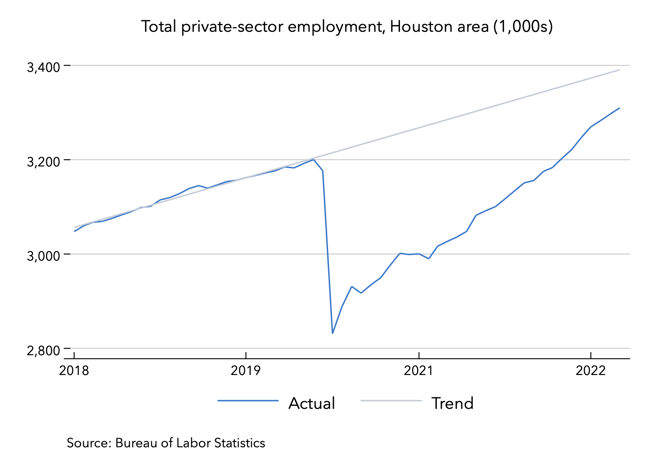 Yet there is one sector that's still propelling the steep recovery of jobs forward, almost three years after the Covid-19 pandemic began. The Bureau of Labor Statistics includes it in a super-sector called "Trade, Transportation, and Utilities". But transportation and utilities, though they've been growing steadily, haven't exceeded the pace of their pre-pandemic trends. That's not true for wholesale and retail trade: 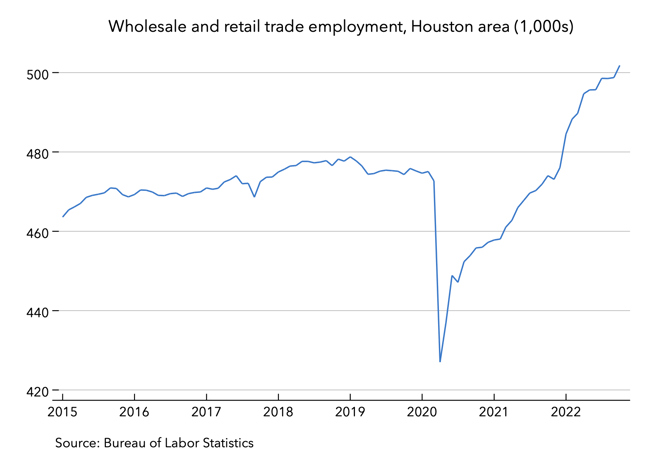 Employment in these industries was virtually flat for several years before the pandemic. It took a big hit early in 2020, but now it's 5% higher than its previous peak in late 2018. Over in Dallas, something similar is going on: 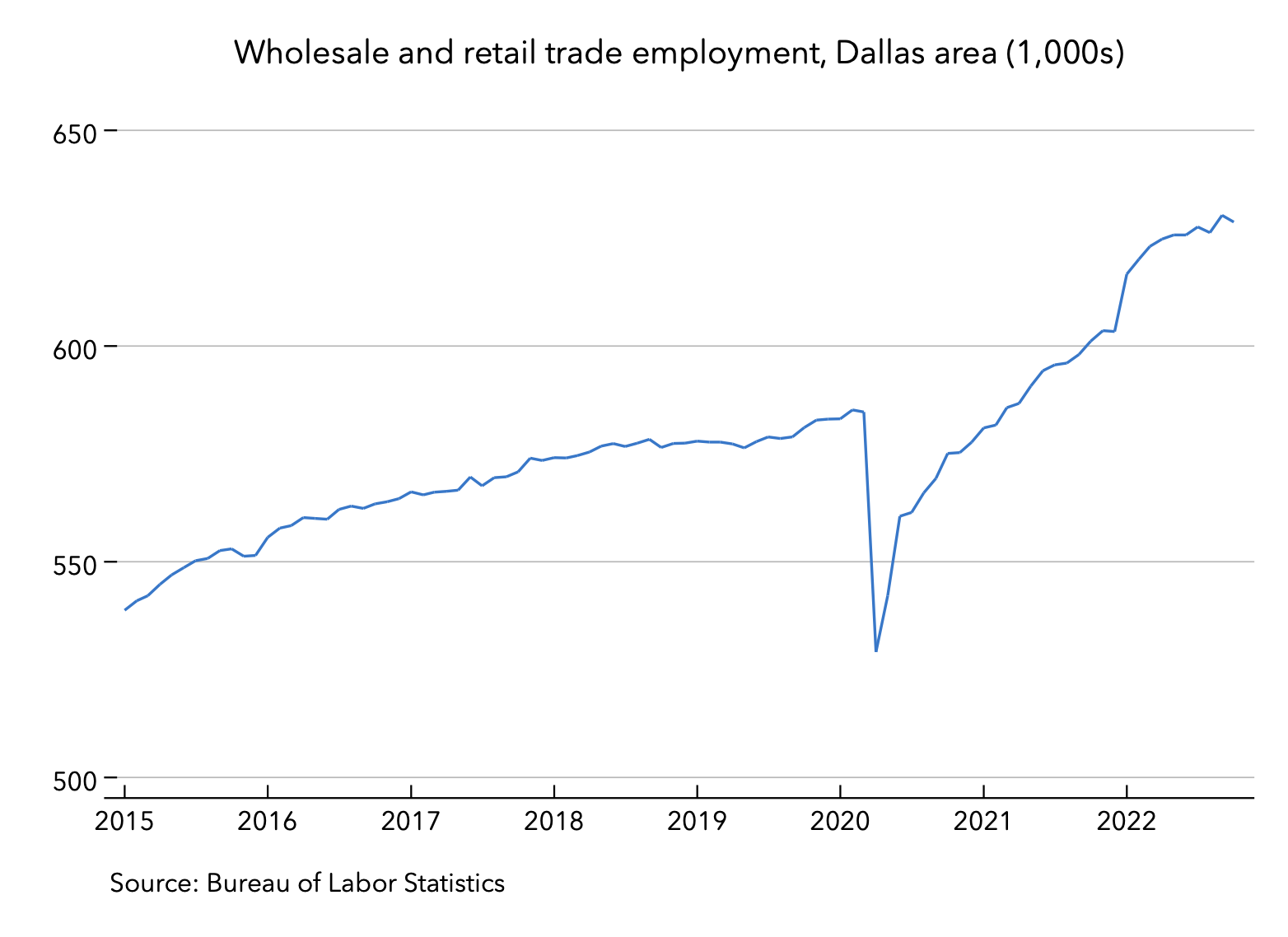 Trade employment was growing faster in Dallas than in Houston before the pandemic, but it's also taken a huge jump, especially early this year. Overall, there are 7% more jobs in trade in the Dallas area than there were on the eve of the pandemic.

This is not typical of the United States as a whole. Here's the same chart for the entire country: 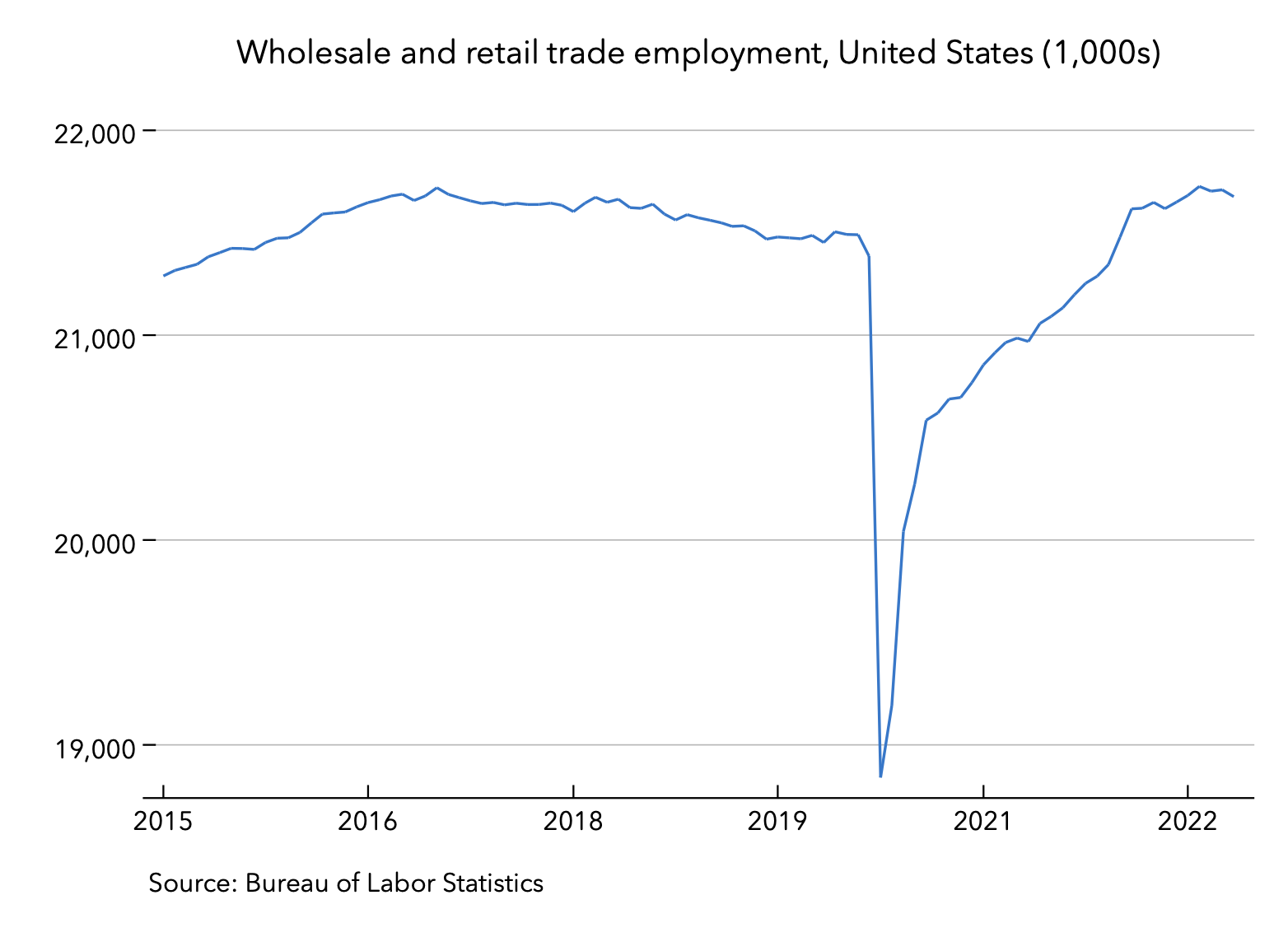 In the country as a whole, trade jobs are now at the same level as they were at their previous peak in September 2016. And while this trend and the trend for the Dallas area have flattened out, the trend for Houston is still rising. So what gives? Why are people in Houston spending so much money?

Of all the major metropolitan areas in the United States, none is more dependent on the oil and gas industries than Houston. It's home to a slew of giant energy companies – more than a dozen in the Fortune 500 – as well as thousands of related businesses. The largest of these businesses have been pulling in record profits, with rising share prices to match. Plenty of these profits will go to investors elsewhere in the world, but a fair amount will show up in the compensation and wealth of Houston residents.

Houston's port has also been setting records, with its highest-ever container volume earlier this year. Some of the biggest imports that arrive in Houston, like palm oil, have also had huge price increases that led to big profits for wholesalers and retailers. As the demand for these products grows, so does employment for those who sell them.

All told, a huge amount of wealth has been generated in the Houston area in the past year or two. And so, not surprisingly, Houston is spending. Personal consumption expenditures in Texas rose by 14% between 2020 and 2021, well above the national average.

The consequent uptick in trade employment has helped to close the gap with the national unemployment rate. Since December 2021, the gap has narrowed by a whole percentage point, to 0.7% in October: 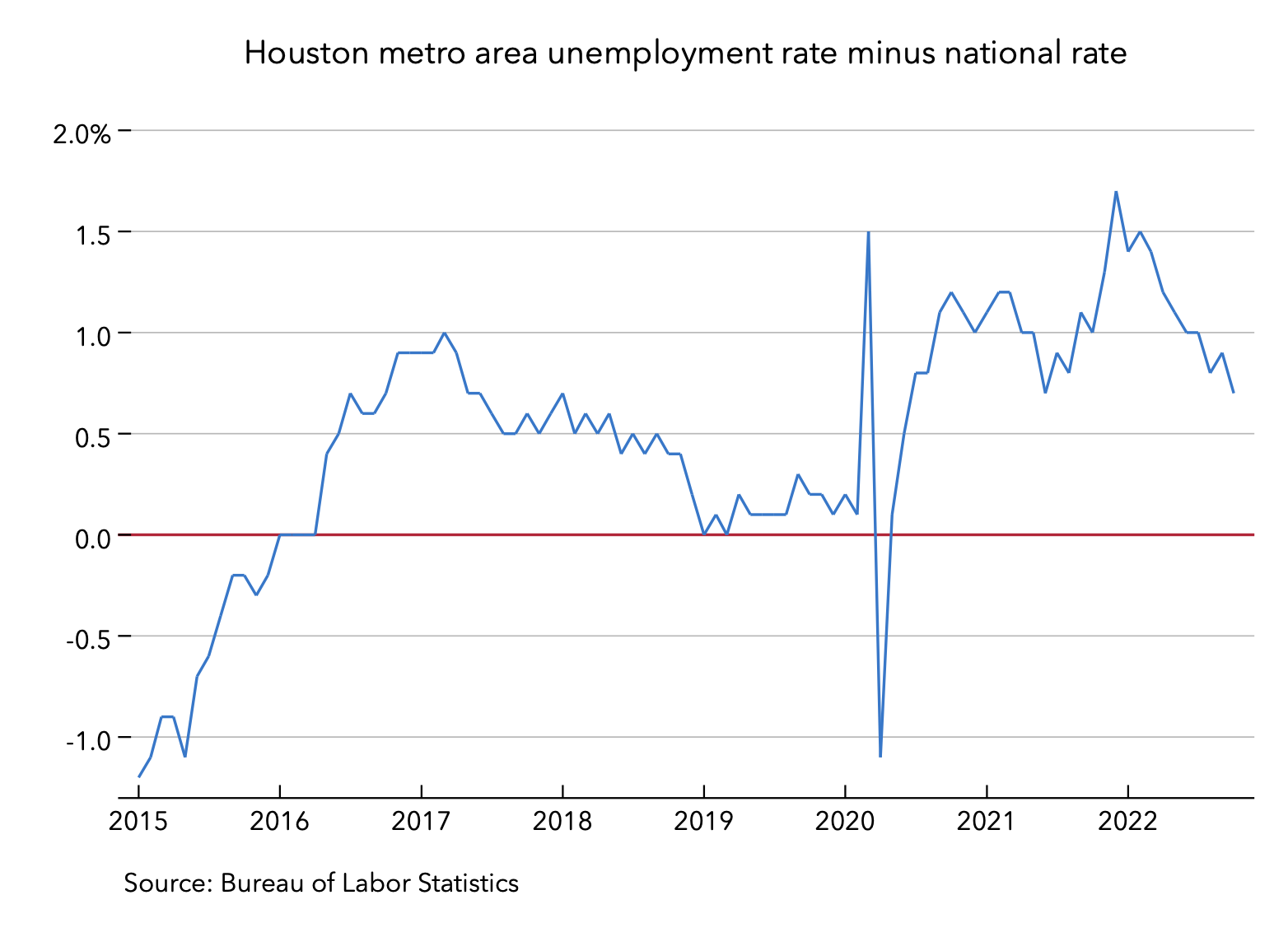 At Instawork, our Houston hub is ready to help businesses meet their staffing needs as the labor market tightens. Even though energy prices are falling again, this spending spree doesn't look like it will run out of gas anytime soon.

These metrics, derived from data aggregated across the Instawork platform, compare the two weeks starting 11/24/2022 to the previous two weeks. To control for the overall growth of the Instawork marketplace, only shifts involving businesses that booked shifts in both periods are included: